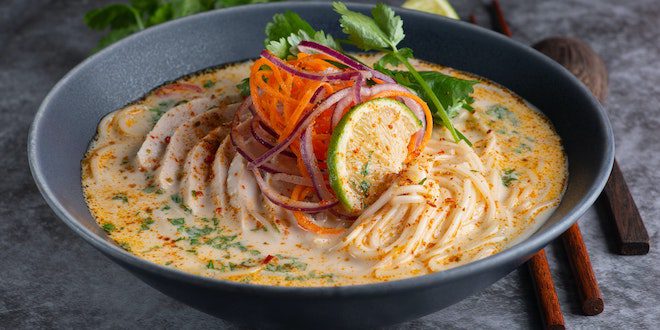 Who can even resist that warm, flavorful soup joined with many long strides of carbs to fill you up on a cold, cozy evening? This had been a lifesaver for instant satisfaction, especially during a long tiring day. We can have this every time we feel hungry while working remotely, watching Netflix, and even while going to work. Noodles had been a holy grail food that only lets you wait less than five minutes before you indulge — a to-go-to food that can never be missed from your grocery list.

Instant noodles are considered a staple food in some areas around Asia Pacific countries, namely Japan, China, Singapore, and others, which comes with over a hundred varieties that you can reinvent for a thousand recipes. This is considered the most convenient and efficient food for people that can provide the adequate energy that they need for the day.

Here are five fun facts you didn’t know about your favorite instant noodles.

1. Noodles were originally created for the rich

When it was first marketed by a Taiwanese Japanese businessman Momofuku Ando in 1956, it was sold six times higher than the original price of fresh noodles. The reason behind it was its shelf life and novelty. Today, this has become the most friendly budget food out in the world, which you can buy over the counter that costs an average of 140 dollars a year. Hence, people buy it because it’s satisfying and at the same time cheap.

For the Chinese, noodles are a symbol of long life. When you eat noodles, you can have a long and healthy life. Hence, noodles can never be missed during birthdays and the new year celebration. These are called longevity noodles which means the longer the noodle, the longer the life you’re going to perceive.

Japan is responsible for the making of instant easy to cook noodles. Hence, slurping your noodle is considered appropriate in their country since it shows the delightfulness of the food prepared, which means the food is delicious. In some countries, this is deemed to be improper table manners.

Japanese Astronaut Soichi Noguchi was able to carry with him instant noodles made by Nissin Food. It was specially developed for a zero-gravity environment, created as a ball-shaped noodle that astronauts can eat using a fork. They call it Space Ram, which comes with four different flavors- miso, soy sauce, curry, and pork broth. Nissin claimed that the noodle soup is thick enough to avoid spilling, and also, its noodle ball retains its shape even upon reheating.

The first noodle was first discovered at the Lajia archaeological site (northwestern China) in an overturned sealed bowl. The bowl was buried under ten feet (three meters) of sediment.”The noodle was made out of two kinds of millet grains — a thin yellow long stride of noodles.

Maria Kennedy is the managing editor at Travel for Food Hub. Maria is on a full-tilt mission to share local food and travel inspiration. When she is not writing about food and travel, startups or social media, she is enjoying her time with her boys in sunny Spain.
@mariaonzain
Previous 6 Best-Known Meat Types Worldwide
Next 4 Unique pubs and bars for Outdoor Drinking in the UK