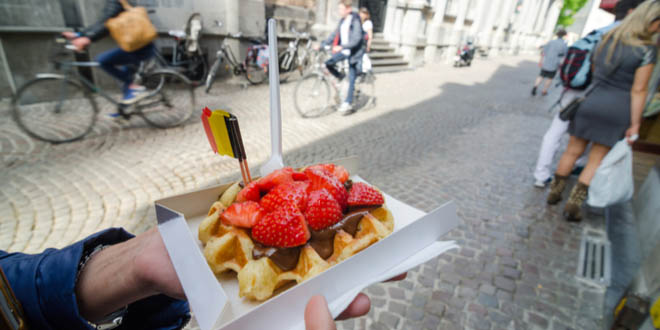 Whether you find yourself in Brussels, Antwerp or Brugge or maybe in one of the smaller cities like Louvain or Dinant, there are Belgian specialities you will find no matter where you are. It is true that the Belgian cuisine is influenced by the French one, but there are Belgian foods you will not find in France (and vice versa).

I guess that this doesn’t come as a surprise! If you happen to be at the Grand Place in Brussels, you will easily run into stores like Leonidas or Neuhaus. But what exactly is the difference between these brands? Leonidas is the most popular and the cheapest. In general, the chocolates are of good quality, although some of them can contain a lot of cream and/or butter. Godiva and Neuhaus are more expensive and offer really refined produce. Want to splash out more money? Have a look at the shop of Pierre Marcolini and try some of his luxury  – and even experimental – chocolates.

By the way, did you know that a lot of “patisseries” sell chocolates as well? It offers the possibility of spending less for more quality.

There are about a dozen varieties of waffles in Belgium. You can find them at stalls in shopping streets or near popular attractions, or you can buy them prepackaged in supermarkets. Go for the fresh variant and treat yourself to some extra cream and strawberries, when they are in season – from March or April until August.

Did you know that there are more than two thousand varieties of beer in Belgium? Most cafés offer between 20 and 100 varieties or even more. The most popular types are pilsner, abbey beers, trappist and fruit beers. Feeling overwhelmed? Here are a couple of rules:

If you really don’t know what to choose, ask the waiter or stick to pilsner and abbey beers.

You love beer and meat? Then this is the perfect dish! This is beef stew, with dark beer, brown sugar and mustard. It is still a huge favourite in most Belgian households, not only because it is tasty, but also easy to prepare. In most restaurants, this dish comes with French fries.

Another classic of the Belgian cuisine! When you order this dish, the waiter will ask how you would like to have your steak prepared. We use the French terminology: bleu, à point, mi cuit and bien cuit. In the bigger cities, the waiter will translate these to English. If you want to eat like a real Belgian, stick to à point or mi cuit. By the way, when we talk about steak, we do refer to beef. Usually, the menu indicates whether the meat is grilled, broiled or pan-fried.

TAKEAWAY: The season of mussels roughly starts in July and lasts until late winter, but a lot of Belgians stick to the “r” rule, which means that they only eat them in the months containing the letter “r”. Some of them – me for example – only consume mussels between November and late February.

By the way, the start of the mussels season is a televised event, with experts commenting on the shape, size and taste. which determines the price per kilo and eventually the amount of money you will have to pay in a restaurant. Mussels come in big pots, usually between 800 and 1200 gramme. You can choose between 10 to 15 preparations, the most popular being “nature” with white wine and “sauce provençale” (sauce with tomato, red/yellow pepper, carrots, onions, …). Mussels come with French fries and “mosselsaus”, a sauce based on mayonnaise, mustard and vinegar.

Can I be honest? This dish is my absolute favourite! This is actually a tomato, stuffed with a combination of mayonnaise, the meat of the tomato and shrimps. Shrimps come in all shapes and sizes in Belgium, but for this dish, we use the small grey ones. And these happen to be the most expensive variety. Maybe this is not the cheapest dish on this list, but it is very delicious. And I know I am repeating myself, but this dish comes with… French fries.

This is not the most refined dish… And actually, this is not even a complete dish. Stoemp is a mixture of mashed potatoes, mixed with vegetables such as leek, onion, carrots, spinach… The name comes from the Flemish word ‘stoemper’, which is the tool that you use to mash the potatoes. Stoemp is usually accompanied by pork (sausages) and is hugely popular in Brussels.

This is a dish that is popular when the weather gets colder: chicory with ham and cheese sauce. The chicory is enveloped with ham, both are afterwards covered with cheese sauce and the whole dish goes into the oven. Not everybody likes this, usually because of the bitter taste of the chicory. There are lots of varieties of this classic, however; in some regions, for example, the cheese sauce is replaced by cauliflower sauce. And you might be surprised, but French fries are never combined with this speciality.

This is a French classic that has become popular in Belgium and which you will find in the Netherlands as well. This is minced raw beef, served with capers and freshly ground pepper, usually with raw yolk. Some people shy away from this dish, because of health concerns, but I can assure that it is very delicious. The best restaurant where I have had steak tartare is the restaurant of the Musical Instruments Museum in Brussels.

A word of warning for those of you visiting Brussels. Do not go to the Beenhouwersstraat, even if your tourist guide recommends it! I know, it is picturesque and cosy in those narrow streets, but the food served here is overpriced, of poor quality and most of it has got nothing to do with Belgian cuisine. This is merely a huge tourist trap. Do some research or go to the local tourist information office.

Ingrid Dendievel is a Belgian teacher, blogger and photographer. She loves to travel with her Danish fiancé, and they both enjoy tasting local foods and drinks. You will never see her without her Nikon D7100.
Previous 10 Weird Street Foods To Try In Vietnam
Next 6 Must-Go Food Festivals In Japan 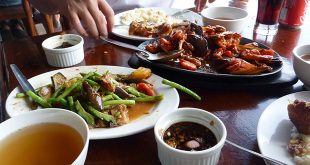 8 Must-Try Foods in Tagaytay And Where to Eat Them