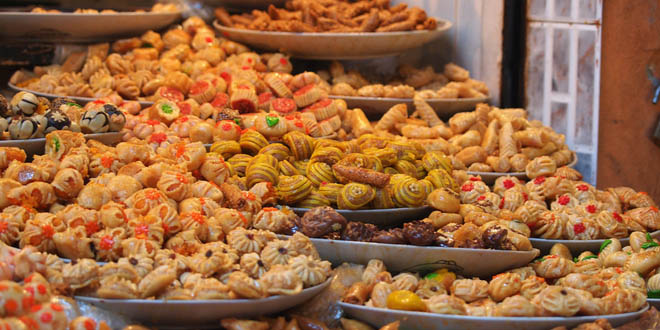 9 Street Eats in Marrakesh To Satisfy Your Inner Foodie

Street food is not only an excellent way to experience a variety of traditional dishes, but a great strategy for staying off hunger. While wandering the streets of the old city and market, there are plenty of options to choose from. Among the street eats in Marrakesh you will find both sweet and savory snacks abound. These below are just a selection to satisfy your inner foodie. And to get them at the best price, follow the bargaining tips mentioned in “5 Tips To Survive A Visit To A Souk In Marrakesh.”

B’stillas may fill you up a bit more than most of the other snacks on this list. That’s because they are filled with meat. While it might seem strange, seeing as it is filled with meat, the b’stilla has a distinctly sweet taste. Some of them are covered in powdered sugar and cinnamon, while others are encrusted with almonds. Those, however, are more common in formal bakeries than stands in the street.

Just as the outside can be covered with a variety of toppings, the filling changes too. The most common is some variation of a savory pulled chicken. The outside and insides compliment each other wonderfully because they use similar spices. On the streets, b’stillas are usually smaller so they can be easily eaten on-the-go.

If you’re filled to the gills with hobes, don’t worry, Moroccans have many different types of bread for you to try. One of the best is raifa: a flaky, square pastry that melts in your mouth (seriously.) The delicate texture comes from the way the dough is cut and folded.

TAKEAWAY: The baker starts by rolling out the dough into a rough square. Then, they brush the dough with butter and cut two evenly spaced parallel slashes a third of the way into the center on both sides. From there, they fold the dough inward until it creates a smaller square. This is then cooked on a grill and served fresh.

Sellou (also called sfouf) is traditionally eaten around Ramadan. Women who recently gave birth also may be given batches as a gift. The reason is that it is highly nutritious thanks to the ground almonds and sesame seeds which make up the bulk of it. The flavors primarily come from the combination of spices. Cinnamon and anise take center stage here. The nuts and seeds, along with some flours, are all roasted before they are ground into the distinctive powdery texture. This technique gives an additional toasty flavor.

In Morocco, hummus isn’t to the pureed perfection of the Middle-East but a different, equally delicious, whole chickpea snack. These beans are roasted, salted, and lightly seasoned. After a few days of decadent meals, they are a welcome, healthy snack. They are generally served in small paper cups, ideal for walking and snacking.

There is tons of juice all throughout Morocco. Every restaurant serves some and there are countless stores lining every urban street. In the old town, orange juice is more visible, but the sugarcane is a fun change of pace. It tastes a bit like a sweet lemonade. You can tell which stand sells it by the basket of long canes that stand next to it. On a hot day, few things are more refreshing.

Another popular dish during Ramadan is chebakia. They are sweet-fried doughs that are then drizzled with syrup. Some places will also sprinkle sesame seeds on top. Fair warning, these are not for the faint of heart as they can be extremely sweet. So, while they are delicious, starting small is advisable.

If you do not visit during Ramadan, have no fear. Not only will some places still sell them, but there are also plenty of other desserts to try. Many of which feature fried dough and honey so you’ll have plenty of chances to fix your chebakia craving.

If you are prone to purchasing treats because of their appearances, get ready to eat a lot of marzipan. The marzipan in Morocco is crafted and colored into fantastic creations. There are all sorts of fruits and flowers, and each one is delicate and beautiful. Some cookies will also be filled with marzipan. There are also marzipan tarts which use the marzipan to contain almond relish and fruit fillings.

Morocco produces tons of fruit. Depending on the season, you’ll be able to find all sorts of fresh produce. The widest variety will be in the food markets. Even in the more souvenier-centric parts of Marrakesh, vendors will sell some fruits. The best approach here is to go in with an open mind. Whatever they are selling is what’s in season. If you go searching for one particular fruit, you’ll have to dive into the center of the food stalls, pay more, and receive less fresh products. You may also miss out on some of the best figs and cactus fruits around.

Insider’s tip: For those with a sensitive stomach, be a little more wary of fruits where you’ll eat the skin. Your safest bet is either to peel them first or to wash your find with some bottled water.

Part of what makes Morocco so unique is the ever constant meeting of cultures. And this phenomenon did not end once the French government officially left. One of the big immigrant communities in Morocco today are groups of Syrian refugees. Many have set up stands and restaurants. These tend to be wonderful spots for baklava and other honeyed desserts. While it might seem a bit strange to travel to Morocco for Syrian food, eating at these establishments is a great way to appreciate the differences and similarities between Middle-Eastern and North African Arab cuisine. Try a few snacks from Syrian and Moroccan bakeries side-by-side to get the best comparison possible.

There are many street eats in Marrakesh. Many of them are sweet, but there are plenty of savory options too. Nonetheless, all of them can be found cheaply and easily wandering through the medina. The best tip on where and what to buy is to look where the locals go. Otherwise, follow your nose and eyes. There are plenty of other options listed to meet any desire. For more specific local advice, and formal dining suggestions, read at Maroc Mama, a fantastic source for all sorts of information on Marrakesh and Morocco. Even the pickiest of eaters would have a hard time going hungry in Marrakesh.

Kate is a language student. Last year she lived in Russia, Israel, and Morocco. She also traveled to many other destinations and explored the cuisines there. Now she'll offer you tips to get the most out of your traveling experiences around the world.
Previous Top Travel Tips For Visiting Israel
Next 5 Classic Bites of Jamaican Street Food 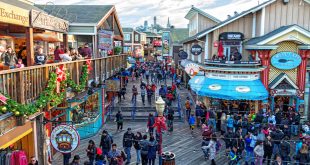 5 Restaurants in San Francisco You Should Try