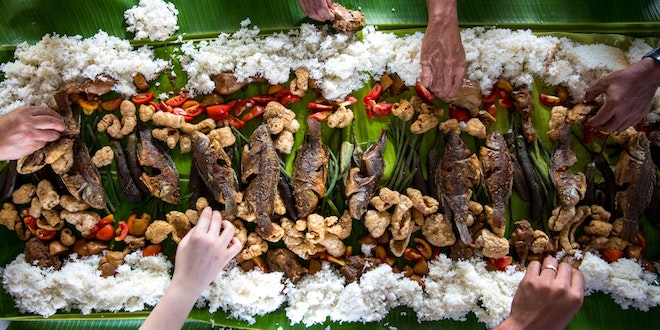 Filipino cuisine is predicted to be the next big thing among foodies. In fact, celebrity chefs such as Andrew Zimmern and the late Anthony Bourdain have raved about Philippine dishes. Cooking them using a mix of Spanish and Asian techniques. Including some delicious dishes such as lechon, sinigang, and adobo. Tourists who regularly go on a food trip in the country may know about foods to try in Tagaytay, Metro Manila, and Cebu’s most famous dishes. But if you want to go on the ultimate food adventure, you may want to head to the southernmost part of Luzon. More specifically, to the marvellous Bicol Region. Here, spicy and coconut milk-infused food reigns supreme. But this part of the country is also famous for its nutty pastries and hearty noodle dishes. Grab your bags and get ready to treat your taste buds to the best foods to try in Bicol, Philipines:

When people think about Filipino food, what usually comes to mind is balut, and if you visit foodienarium, you’ll know that it’s an aphrodisiac dish that’s usually featured in food challenges. But very few people know about laing, one of the most delicious foods to try in Bicol. At first glance, this traditional dish just looks like a sludge of greens in a thick sauce. But have a spoonful of it with some rice, and you’ll be instantly hooked. Laing is made by cooking taro leaves and bits of pork or shrimp in coconut milk, and its distinctive flavour comes from native red chillies, lemongrass, and shrimp paste added to the mix.

Though it’s traditionally eaten with rice, adventurous Bicolanos have started experimenting with it in the early 2000s, and nowadays, you can find laing pizza and pita pockets in some of the swankiest bistros and watersport destinations in the region such as El-Reizo Pizza and the Camarines Sur Wakeboarding Complex. Spread over a pizza crust and topped with cheese, or stuffed into a warm pita with crunchy bits of pork, laing becomes part of a filling snack that’s best consumed after surfing in Donsol or wakeboarding in a man-made lake in the middle of the city.

Most Asian towns, provinces, and cities have their own signature noodle dish. In the Bicol region, the most famous noodle dish is the Kinalas. It’s highly popular in Naga City and some of the most well-known places to get this dish include Bolofer’s, Cely’s and Cha Ced. The broth for the Kinalas is made by boiling beef head and other cow parts for hours until the meat becomes soft and falls off the bone, then this rich broth is poured over egg noodles, topped with shredded beef, a thick sauce, and a sprinkle of toasted garlic. It’s great whether you’re in need of some warmth and comfort on a rainy day or if you want to feel better after a night of drinking with your buddies.

And for dessert, you should try pili tart! The pili nut is grown in the Philippines and is one of the foods to try in Bicol. And the Bicol region is the largest producer of this buttery tasting nut. Pili is often used to make tarts or cakes. Visitors buy them in bulk to take home to their loved ones. The pili tart, in particular, is popular among locals and visitors alike. And this bite-sized treat packs a lot of flavours that will leave you wanting more. To make it, ground pili nuts are mixed with butter, sugar, vanilla, and a dash of salt and the mixture is stuffed into pastry “boats” before baking.

You can easily find some of the best pili tarts in souvenir and pastry shops in cities such as Naga and Albay. But you can also find them in smaller towns all over the region.

The Bicol region is a great place to visit for adventure, sightseeing, and to enjoy great food. Try these dishes and you’re guaranteed to become a fan of traditional and modern Bicolano cuisine!

This is a guest post written by a third party for Travel for Food Hub. If you'd like us to feature one of your own articles or become a regular contributor, contact us by clicking on the button below and filling out the form. We would be so glad to share your food and travel experiences!
Previous 3 Vegan Food Recipes From Remote Workers
Next The Best Places to Eat in Las Vegas

8 Must-Try Foods in Tagaytay And Where to Eat Them

4 Filipino Foods You Can’t Miss When Visiting The Philippines