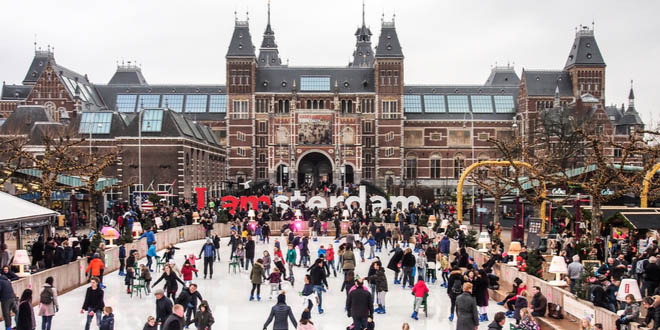 On the second Sunday of November, the Netherlands is visited by a beloved figure known the world over. Sinterklaas (aka Saint Nicholas) sails into Haarlem from Spain to ring in Christmas, spreading happiness and cheer for everyone. Amsterdam is a 15-minute train ride from Haarlem and is a popular spot for its scenery and Christmas Markets. These markets throughout Europe contain goods of all kinds. Homemade crafts, traditional treats, seasonal drinks, and even ice skating rinks can be found around the market stalls. They are composed of people sharing their talents and goods, embodying the holiday spirit. However, some of the best treats are discovered by accidentally getting in a line and picking random items off the menu. But if you’re looking for the more traditional holiday treats from the Amsterdam Christmas Markets, look no further!

Mulled wine is a traditional drink that has spread all over the globe and is made most commonly at Christmas time. This beverage dates back to the Roman empire when soldiers would heat their wine before marching to battle the cold. Amsterdam has its own twist, calling it “bisschpswijn” instead of “Glühwein” which literally translates to “glow wine” for the hot irons used to mull the wine. Bisschpswijn means “bishop’s wine,” and instead of lemons and white wine, it is mulled with oranges and white wine. Often decorated with embellishments such as fruits, spices or cinnamon sticks, this 18-and-over drink is truly a treat. Warm and delicious, enjoy responsibly if you plan on drinking while shopping the market!

TAKEAWAY: Bisschopswijn is called Sinterklaas‘ favorite drink, and comes in different varieties. Each European country has its own take. Glühwein originated and spread heavily from the Romans as they brought their mulling equipment when invading countries. Now, it is most popular in Germany and certain regions of France. Usually prepared with red wine, Amsterdam prefers white. The final touch is spices. Options include vanilla, cinnamon sticks, cloves, citrus, star aniseed, or even flaming sugar cubes!

This pastry is a classic in the Netherlands, but especially at Christmas time. Essentially a donut, this deep-fried dough ball has a special surprise waiting inside. What’s more, stall vendors love to stuff these with sweets, such as apples, raisins, or even Nutella! The top of the olliebollen is sprinkled with powdered sugar to give a festive look. As long as you’re wearing an appropriate color while eating, have no fear. It’s a messy, but delicious, Christmas Market staple.

One of the most beloved foods is cheese! Amsterdam offers a wide variety of cheeses, or kaas, in the Christmas Markets. The most commonly found is gouda or edam. Melted on bread, made to dip in, or cut up pieces are easy to find, as many of the Dutch enjoy this food. My personal favorite was a smoked gouda that I bargained for and haggled the price down. If you’re looking to mix in some greens, search for goat cheese crumbled onto a salad with honey drizzled over it. Veggies and dessert in one, who knew! The markets encompass much more than this, but don’t miss the cheese from vendors.

The stall vendor I bought this dish from described it as something that was as Dutch as sitting on the canal walls in Amsterdam, viewing the tulip field paintings, or enjoying a cup of groentesoep (vegetable soup) with family. Kibbeling is similar to fish and chips but is cut into two-inch pieces and served with pickles. Being a city on the water allows Amsterdam plenty of access to fresh fish. So take advantage of this freshly cooked dish while wandering the chilly market rows.

During Christmas time we make cookies of all shapes, from snowmen to bells and anything dough can be molded into. The Amsterdam markets host plenty of stalls selling kerstkransjes, or cookie Christmas wreaths. Decorated with slivered almonds or chocolates, then sprinkled with sugar, the cookies resemble a Christmas wreath. This shape is to ensure that a small ribbon can be tied through the middle, then to a Christmas tree as an ornament! Children spend the season trying to eat the cookies off the tree and leave as many bare ribbon decorations as possible. Picking up these treats at the market gives you a wide selection of cookies to chose from, and saves some of the hassle of baking them yourself. Or you could eat them as you wander around and find a new favorite flavor.

The Christmas Markets of Amsterdam are a highlight of the best cultural experiences of the season. People from all over the world are gathered to sell their homemade goods, be it food or otherwise, and to share in the laughter and joy of the season. Everyone is bundled up with hats and gloves. You can ice skate, sing, participate in walking the Light Festival, or just eat. Whatever you do, the Holiday treats from the Amsterdam Christmas Markets can’t be missed. They provide a vital part of the experience; and who doesn’t want a tasty snack while walking in the cold? Be sure to find local cooks who can talk about their craft and give you a chance to sample these traditional Dutch treats.

Carrie has always held the belief that travel and sharing cultures makes the world a better place. She recently graduated with a degree in Archaeology and Art History, and currently works as a travel agent. Some of her travel destinations include Spain, France, England, Ireland, Scotland, Italy, and the Netherlands, with many more on her list. An avid reader, archer, singer, and food lover, she's excited to be writing about how it all comes together.
Previous Food Guide To The Florentin District in Tel Aviv
Next 15 Restaurants to Travel The World from Melbourne 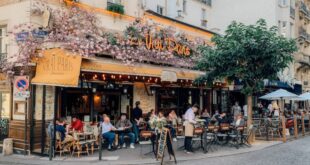 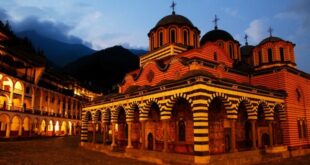 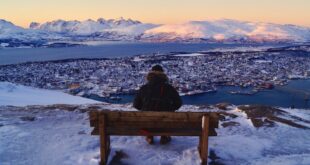