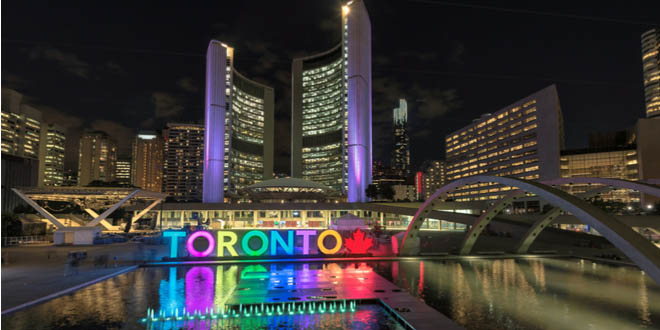 4 Sweet Treats On The Streets of Toronto

On a recent trip to Toronto for work, I decided I was going to find and explore the city’s Little Italy neighborhood. Pasta is a major food group for me as someone of Italian heritage. I set off on foot towards Bathurst Street and College Avenue, the intersection where Little Italy begins.

On the way to my intended destination, I discovered an eclectic part of College Avenue, a main drag that crosses a large swath of town. From the intersection of Spadina Avenue to Bathurst, College Avenue is dotted with Middle Eastern restaurants, organic food shops, dive bars, used bookstores and the odd tattoo parlor. Panhandlers, college students, and young professionals stand side-by-side waiting to cross the street adding to the colorful nature of the surroundings.

What started out as a quest for dinner ended up with me eating desserts instead. I stopped dead in my tracks upon spotting the bubble gum pink sign for Jelly Modern Donuts. If I had to choose between a cupcake and a donut, I’d go donut. All. Day. Long. So, of course, I had to go in, and boy, am I glad I did! Little did I know I was about to eat championship donuts. Jelly has earned numerous awards from such media outlets as Chatelaine Magazine and Food Network Canada’s Donut Showdown. But the brand did not find success overnight.

Jelly offers a wide variety of flavors ranging from s’mores to lemon glazed and come two sizes: “three bite” and regular. They also offer a unique donut of the month. I chose Madagascar vanilla, maple bacon, and this month’s special donut flavor, Nanaimo Bar. You may be asking what is a Nanaimo Bar and why or how is it a donut?

TAKEAWAY: Nanaimo bar is a classic Canadian dessert that Jelly adapted into a donut. This sweet dates back to the mid-20th century Nanaimo city (British Columbia). It has a crumb base, a layer of butter icing and it is topped with some delicious melted chocolate. The dessert has made Nanaimo so famous that the city has prepared a Nanaimo Bar Trail for tourists to taste the best and most delectable Nanaimo bars.

Between this exceptional donut and the maple bacon, you could say I died and went to Canadian donut heaven, eh?

Just as I thought I got my sugar fix, I walked a few more blocks and came across The Big Chill, a whimsical ice cream shop complete with counter stools and an arcade. Its pastel palate and jukeboxes made me feel like I stepped back in time to an era of sock hops and poodle skirts. But, what I noticed about the décor were all of the cow figurines and knick-knacks adorning the walls and shelves. Obviously, they wanted to remind people that ice cream is made with well, cream, which ultimately comes from cows.

The Big Chill offered 34 flavors the day I was there. Out of all the flavors to choose from, I had to get the maple walnut, because when in Canada, one can never have enough maple! Creamy and crunchy. Sweet but not excessively. I highly recommend the maple walnut if you ever find yourself at The Big Chill. When I finally found myself in Little Italy, I was stuffed. Not from pasta, but from goodies I encountered along the way.

By now, I had given up on eating a square meal and decided to go right to after “dinner” drinks. Thankfully, I had plenty of choices as I continued down College Avenue. I settled on a place called The Walton because the sign outside made a bold statement: “World’s Most Adorable Patio.” With advertising like that, how could I resist?

The Walton’s quaint outdoor space was illuminated with string lights and paper lanterns overhead. As I sat down at one of the small wooden tables, a friendly server promptly took my order. And in an instant, a sweet potato toast and a “pink mimosa” greeted me. The sweet potato toast was somehow not what I imagined but was sweet, savory and tasty nonetheless. And, I sincerely recommend the mimosa. A combination of pink lemonade and bubbly, the pink mimosa has all the charm of an old-fashioned fancy cocktail. I plan on swapping out traditional OJ for the more tart version of this popular drink. Do try this at home!

My last stop of the evening was just as random as the ones before. I was lured inside by the 90’s old school hip-hop coming through the windows. The place was called Night Owl. But it was only 8 pm. Therefore, the bar was populated with Bros, beardy and man bun’d. I instantly felt like everyone’s mom, but they were listening to the tunes of my youth after all. I was fading fast, but could not pass up the adult soda fountain floats on offer. So I went for the orange creamsicle and was not disappointed. Nothing says a night out like orange Crush, vodka, and whipped cream. Especially if that is not what was expected.

As you can see, sometimes the best experiences are unplanned. That’s why I suggest you take your own adventure in Toronto starting your coordinates at Spadina and College. Then, let your feet wander and let me know what you find.

Capri S. Cafaro has spent most of her career in the governmental, non profit and academic sectors. An Ohio native, Capri grew up learning to cook and bake with her Italian-American grandmother who influenced Capri's love of travel, pasta & pie.
@thehonorablecsc
Previous 5 Pittsburgh Restaurants Foodies Can’t Miss
Next 6 Things You Don’t Know About Eating Mandi Rice In Dubai 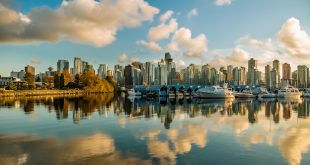 Restaurants in Vancouver you must try