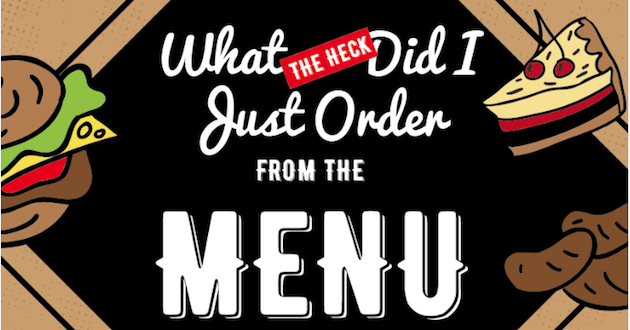 Ever wondered why for some food names we’ve just adopted the foreign word for it and not translated it literally into English? This infographic is going to tell you why…

When you discover the literal translations of these foods, you’ll completely understand why we didn’t translate them. Appliance manufacturers CDA have taken some popular dishes from around Europe including France, Germany and Denmark and the results are equal parts eyebrow-raising, hilarious and in some cases, a little bit disturbing.

Browse CDA’s menu below, what are you having?

Whilst this isn’t any food in particular, an amuse-bouche is generally another term for “hors d’oeuvre”. Amuse-bouche translates as “Mouth Amuser”. This one is logically sound as that’s exactly what an amuse-bouche does, it’s designed to wake up the taste buds and is a little treat to have before a meal or while mixing at a cocktail party.

Hors d’oeuvre translates as “outside of work”, as that’s when you eat them!

TAKEAWAY: Italians are the specialists and originators of pasta. There are at least sixty different varieties of Italian pasta. Some say there are up to 200 in Italy alone, but there are around 350 worldwide.

So how did this variety get the name ‘Priest Strangler’? In Renaissance Europe, priests weren’t exactly the do-gooders they are seen as today. Being a priest back then was like being a banker today, and when the locals would feed their priests, they gobbled down Strozzapreti so fast, it choked them to death. This wasn’t exactly the worst thing that could happen and the “Priest Strangler” ended up being quite lovingly adopted.

The English term for this food is ‘black pudding’, which is a nicer way of saying ‘sausage made of congealed blood’. The Germans decided against mincing their words like us and just went for Tote Oma which means “Dead Grandma”. Is this a German attempt at humour? Who knows? We won’t be adopting this term anytime soon.

The Scots aren’t really famous for their food, haggis being perhaps the only known Scottish delicacy around the world. Scottish cuisine is famously austere. The mighty Scots were the only people to send the Romans packing, but this left them playing catch up on the culture and cuisine front. This Scottish dish is just mushrooms, but the Scots-Gaelic translation is “Poo Satchel”. We’ll stick to mushrooms.

Blote Billen in Het Gras = Bare Buttocks in the Grass

This Dutch dish has the fantastic name of “Bare Buttocks in the Grass”. Don’t get too excited, though. This dish is simply some mashed potatoes with assorted veg and beans. The butter beans protruding from the veg sometimes looks like…you know the rest.

This is some very basic marketing from the English language here. How would restaurants possibly sell dishes of “Cheese Breath”, the literal translation for soufflé au fromage? This is the special talent of the French, they could be saying the most crude and vulgar things to you, but their language will make it sound like a romantic poem.

This Danish dish is serious comfort food. Mashed potatoes topped with bacon and onions, served with pickled beetroot. The origins behind its literally translated name of “Burning Love” aren’t clear but as it is a dish closely associated with ‘hygge’, we assume it’s just what every Dane feels for it.

This Dutch carb-fest of a dish translates literally to “War Fries” from the Dutch Patatje Oorlog. But these weren’t eaten in the trenches, they earned their name from its messy nature. The dish consists of chips topped with peanut butter, mayonnaise, ketchup, and diced raw onion. All thrown together it does make the dish look like a bit of a battlefield!

You read that correctly. These delightful French pastries are light, creamy and crispy. They’re so light that they earned themselves the name Pets de Nonne, which literally translates to “Nun’s Farts”. We aren’t going to test the logic and will just continue calling them Pets de Nonne.

This traditional Portuguese sweet treat is made from egg yolks that have been baked and then boiled in a sugary syrup. This would explain the ‘Double Chin’ segment of the literal translation. The reason the double chin belongs to an angel is because nuns and monks would traditionally sell these to help raise money for maintenance of church property. Think we’d rather have an Angel’s Double Chin than a Nun’s Fart. Which is probably the first time those words have ever been said in that order.

This isn’t an obscure dish, eclairs are known and loved the world over and remain one of France’s most delicious contributions to global cuisine. Éclair translates to “flash of lightning”. Therefore, an éclair au chocolat is Chocolate Lightning. All we need is a catchy song a la Greased Lightning to accompany eating it.

Maria Kennedy is the managing editor at Travel for Food Hub. Maria is on a full-tilt mission to share local food and travel inspiration. When she is not writing about food and travel, startups or social media, she is enjoying her time with her boys in sunny Spain.
@mariaonzain
Previous 5 Must Eat Dishes in Harar, Ethiopia
Next 8 Best Things To Eat In California