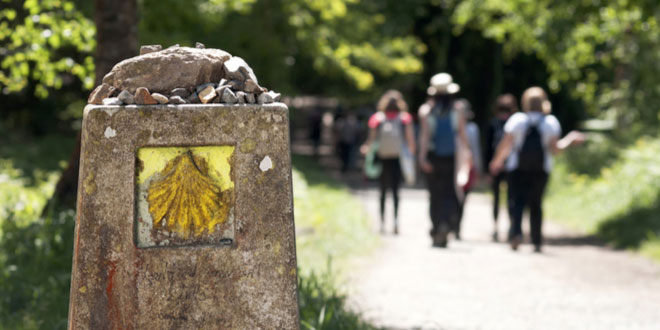 The Camino de Santiago or Way of Saint James is a Christian pilgrimage to the shrine of the apostle Saint James the Great. His remains are buried in the cathedral of Santiago de Compostela in Galicia, in northwestern Spain. While there are various routes through many European countries that lead there, the Spanish Coastal Way has a unique kind of beauty that captivates its pilgrims.

Every year, hundreds of pilgrims walk, cycle or horse-ride through the Basque Country, Cantabria, Asturias, and Galicia following the symbol of the scallop shell. While it may require some sacrifices, this pilgrimage also offers many pleasures; among them: the food. Passing through these culinary-famous provinces of Spain, you can’t miss the chance of trying the best local dishes. Follow this guide for tasting the Camino de Santiago, and it will become a journey you will never forget.

The first stop in the Camino is the Basque Country. This Spanish region is famous worldwide for its top-notch gastronomy. So tasting some of its foods is a fantastic culinary experience. The Basque Country has many specialties that you should try such as cod with any of its sauce varieties: “al pil-pil,” “a la vizcaína,” “en salsa verde…” Or “marmitako,” a stew made of bonito and potatoes.

However, if you’d like to taste a bit of everything you should go on a “pintxo” tour. “Pintxos” are similar to Spanish tapas, but not exactly the same. It’s normally a small slice of bread with any kind of delicious food on top of it speared in a toothpick. Typically, locals go out from bar to bar trying several different “pintxos” in each place while having some drinks. This way you can try fish, “tortilla de patatas” (Spanish potato omelet), peppers, “jamón serrano” (serrano ham), “croquetas” (croquettes), cheese, mushrooms, etc. all in one morning or afternoon.

Finally, you cannot leave the Basque Country without trying its desserts. “Goxua” (layered dessert made out of cream, sponge cake, custard, and caramel), “pantxineta” (custard pastry), “mamía” (sheep-milk junket), “intxaursalsa” (walnut cream) and “basque cake” are some of the most traditional. Plus, be always on the lookout for local sweet treats.

Cantabria is the Spanish region that gives the name to the Cantabrian Sea, which washes the shores of the whole northern region of the country. Therefore, the sea, as well as the near mountains and pastures, have a great impact on everything in this region, especially on the food.

A typical local appetizer or tapa are “rabas.” You will find these deep-fried golden, crunchy calamari rings everywhere, especially in the hours before lunch. Accompanied by some drinks, you may join local people and eat “rabas” in most bars in Cantabrian coastal towns. For a further taste of local sea products, try the famous salted anchovies. This process is a long-kept tradition which results in a delicious sea-flavored bite that you can even buy and take back home to your loved ones.

On the other hand, if you are traveling during the colder months, you might prefer a warmer but equally delicious meal. “Cocido montañés” is a stew made out of white haricot beans, collard greens, and pork. This mountain dish will surely warm you up and leave you ready to take on another stage of the Camino. To finish up your meal, you should try some of the local desserts. The “sobao pasiego” is a kind of sponge-cake made out of flour and butter and they are really easy to take with you for an on-the-road sweet bite.

If Asturias is known for two things is for their “fabada” and their cider. While Cantabria’s mountain stew is well-known, Asturian “fabada” is easily Spain’s most famous stew. It is made out of local large white beans called “fabes” – which are the ones to give the name to this dish – chorizo, black pudding, and pork. Since its such a hearty meal, it is usually served as a single main dish. It may be accompanied by a glass of cider. Cider is a local alcoholic drink obtained through the fermentation of apples.

TAKEAWAY: If you have the time, visit a “sidrería” – cider bar – and ask the owner to pour you a glass following the practice known as “escanciar.” He or she will then take the bottle with one hand and raise it as high as they can while holding the glass with the other hand as low as they can. Then, they will pour it so as the cider breaks against the border of the glass. This method allows the oxygen to mix in and boost the natural carbonated gases the cider holds, giving it a better texture and aroma.

As it couldn’t be otherwise, Asturian cuisine also offers some magnificent dishes featuring fresh fish and shellfish. One of the most curious ones may be “pastel de cabracho.” It is a pie or pudding made out of red sea scorpion fish, which is normally served as an appetizer or tapa. The anglerfish or “pixín” is also featured in many local recipes. For those with a taste for meat, “cachopo” is a must try. It consists of two large veal fillets, filled with cheese and serrano ham, coated with egg and breadcrumbs, and fried.

Moreover, if you’d like to take a bite for the road, go into a local bakery and ask for a “bollu preñáu.” It’s a bread bun filled – literally, “pregnant with” – spicy sausage or chorizo. It is always present during local festivities but can be eaten all-year-round. And for a sweet taste of the region, try some of the desserts made with milk such as “arroz con leche” (rice pudding), “frixuelos” (milk crepes) or “leche frita” (fried milk).

For the last stages of the pilgrimage, you will pass through the region of Galicia, a foodie heaven. Galicia is located on the north-western corner of Spain, surrounded by both the Atlantic Ocean and the Cantabrian Sea throughout its 12,000 km coastline. Therefore, the sea has shaped this region, its people and its gastronomy.

The unique ecosystem gifts locals some of the most exquisite culinary products such as octopus, barnacles, scallops, spider crabs, mussels, hake, cod, mackerel, etc. Galician cooks respect the high quality of the produce by preparing simple but delicious meals. A great example of this is “polbo á feira,” literally meaning “fair-style octopus.” For this meal, the octopus is boiled and served with salt, paprika and olive oil over a wooden plate.

Apart from sea products, Galicia also offers some other delicacies such as Padrón green peppers or “empanadas.” Padrón peppers are small bite-size peppers, rich in flavor, and with a peculiar characteristic: that some of them are spicy. It is said that around one in five is spicy, but you can never tell which just by looking at them. “Empanadas,” on the other hand, are always a safe bet. These pies can be filled with almost anything from fish to meat and are great to take on the road.

After going through these four Spanish regions, you will finally arrive at Santiago de Compostela. Upon arrival, you will be able to rest and admire the beauty of the cathedral while reflecting upon your long journey. Walking and tasting the Camino de Santiago will have surely given you a unique perspective on the culture and traditions of this corner of the world. And hopefully, it will have light up a spark for wanting to keep tasting Spain’s flavors.

Maite Aja is our Content Editor and Graphic Designer. She has recently graduated in Advertising and Public Relations and is specializing in an area that she loves: digital marketing. She's curious and passionate and enjoys spending her free time reading or watching TV series.
@maiteaja
Previous Top 10 Romantic Things to do in Melbourne
Next 5 Great Food Packaging Ideas for Travelers

5 Things to Consider When Ordering a Wedding Cake